Michelle Thong is a service designer, storyteller and facilitator. As Digital Services Lead for the City of San Jose, she’s leading the introduction of user-centered, iterative approaches to help her fellow public servants deliver better services to San Jose’s 1 million residents and 60,000 businesses.

“Where do we start?” This is the question staring down any team or individual embracing the lofty but vague mission to innovate government. We faced this question when our team was created in 2016 as the City Manager’s Office of Civic Innovation and Digital Strategy (also known as the “Innovation Team”).

We were a small team of five tasked with implementing a broad Smart City Vision in an organization of 20+ departments and 6,300 staff. With a combination of public and private sector experience, our team was full of ideas about how to make impact, but pragmatic enough to know that we’d need to get folks from other departments on board to make progress. Two years later, we’ve doubled our team’s size and are leading multiple portfolios spanning broadband infrastructure, digital inclusion, user-centered digital services, internet of things, and privacy, in collaboration with hundreds of staff across the city.

How did we get here? Much of our work has been guided by an “Innovation Roadmap” that we co-created with department leaders during our first 100 days. The Roadmap is a prioritized list of 22 projects that fall into eight different themes, from process improvements to smart infrastructure to transportation, and it has been crucial to our success. It keeps us focused on a short set of realistic solutions, ensures that we don’t get distracted by the crisis du jour, and helps us say no to projects that are sexy but not in line with the City’s priorities. 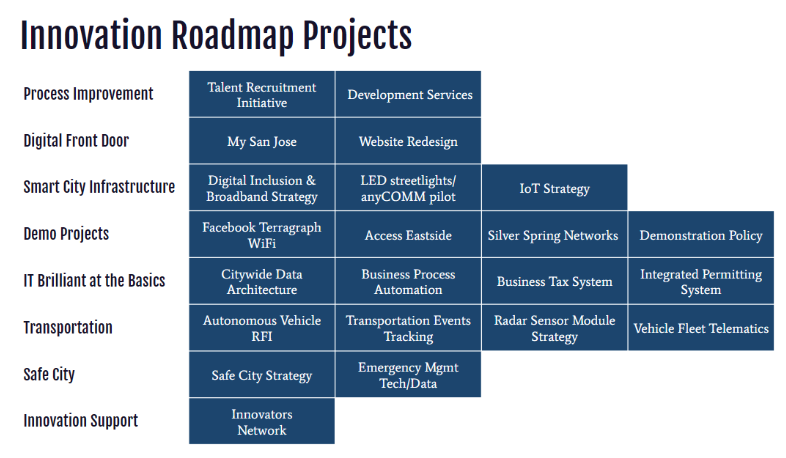 Along with our Roadmap, we also have several  principles that guide our process:

While we were setting up our new innovation team space in City Hall (stereotypically open plan with lots of colorful sticky notes), we could have also started with a clean slate of innovation projects. Instead, we embraced work that was already underway. Other city leaders had already begun an inventory of projects that used technology, data, or process improvement to improve the effectiveness, efficiency, or customer experience of City services. The resulting list of 90+ projects formed the basis of the Innovation Roadmap.

I had reservations about starting our innovation initiative with a backlog of other people’s projects. But instead of spending a lot of time figuring out how to get started, we were able to build momentum quickly because most Roadmap projects already had a champion, an owner, funding, and an execution plan in place. Supporting existing projects also gave us the opportunity to learn from staff throughout the City who were already championing innovative solutions in their own departments.

From Day 1, our team has focused on delivering better outcomes for core services such as recycling, maintaining parks, and responding to emergency calls. For any project we are considering, we ask whether the initiative is important to residents and businesses, if it is core to what the City of San Jose can and should do, and whether it is solvable at scale with technology or process improvement. Projects that meet all these criteria are in our “sweet spot.”

As a result of these criteria, improving the City’s hiring process ended up being one of our top projects from our first year (no drones or artificial intelligence involved). The 900+ vacancies citywide were negatively affecting every City department and all the residents who received City services. Using human-centered design to focus on the experience of hiring managers, Human Resources reduced the number of internal approval steps from 15 to 2. With a streamlined hiring process, we reduced citywide vacancies by 25% in a single year.

Finding work isn’t the hard part. The hard part is figuring out when to say no. Rather than taking responsibility for all 90 projects in the backlog, we worked with City leaders to prioritize 22 projects. In some cases, our team owned the project direction; in other cases, departments did. These projects received special attention and support to help them succeed. For example, we set up recurring Friday “demo sessions” to give each project team a chance to share progress, get help with impediments, and receive feedback.

One unexpected priority that emerged through our process was broadband infrastructure. Historically, broadband deployment has not been a core responsibility of local government, but once we realized that 10 percent of our 1 million residents lack a home broadband connection, it became clear that a high quality broadband network is fundamental to achieving all the other Smart City goals. As a result, building out an internal broadband team was one of the first major investments our team advocated for.

The Roadmap’s power lies in continually reinforcing citywide innovation priorities with a variety of audiences, including department leaders, project owners, and City Council. When new opportunities or needs arise, we evaluate whether the project belongs on the Roadmap. The process forces us to acknowledge that as compelling as new opportunities may seem, putting our attention towards a new effort means an existing project will suffer.

Balance was an important factor in our selection process. If we selected purely for impact, we would have ended up with only large scale enterprise projects, all of which are also high risk and high effort. To ensure a balanced portfolio, we evaluated projects based on risk and effort, and selected projects from all of the following categories:

What’s Next For Our Roadmap?

After two years of executing together on the Innovation Roadmap, we are reviewing what we’ve learned, and looking toward the future. We’ve created a separate pipeline for “small wonder” projects that are focused on learning new technologies on shorter timelines than the longer term, higher impact “big rock” projects. We’ve learned that smaller projects and larger projects come into conflict when the same staff are being asked to do both – it’s hard to catch a ball when you’re carrying a boulder. Government transformation requires lots of different players and stakeholders, but the Roadmap has kept us and our partners moving forward in the same direction.

For more on San Jose’s broadband and digital inclusion work, read this profile on the team in Route Fifty.

Share this article:
Previous Post
If you’re planning to redesign a whole city, you need to start somewhere
Next Post
We were looking for a team who was design-ready and hungry to try something new